Every Thursday I invite you to dig in closer into the Salomon Running Team France… and let’s start with the team’s staff.

The first Salomon team France has been set up in 2004. From the start, says Jean-Michel, we have built the team around young runners to be who would grow with Salomon and within the trail practice, around strong human values. Christophe and I spend a lot of time on the field and the races to observe and analyse. As soon as we spot an interesting runner, we follow up on him for a whole season without him being aware of it. No pressure on him while we check on his progress and results. At the end of our observation phase, I contact the runner and we negotiate a partnership. Next step is quite simple, a first year without any set objectives, then at the end of the third season we work together with the athlete on some fixed objectives. A career is all about managing the steps, like for an ultra. Like the idiom says: ‘ good things come to those who wait…’

We try to preserve a human dimension in our relationship with the team, taking on a maximum of 9 runners and 2 permanent staff members. Having less runners also means taking the risk of having a high percentage of unattended races when injuries occur. We try to minimize those by communicating and exchanging regularly with the athlete. What matters is that trail running needs to be the main secondary thing in their life, and I focus a lot on that with the runners. As soon as they understand this, they find their balance, and results come naturally.
As for Christophe, his role is to drive and follow up on the athlete’s trainings all along the season. I have been an athlete within the Salomon team from 2007 up to 2011. I started to train runners in 2009 and had both roles, as an athlete and a trainer up to 2010 with the arrival of francois, a near john doe at the time! Since then I am the happiest man to share all the sportive adventures of all the team salomon espoir and some of the elites who trusted me like francois, Michel Lanne, Thibaut Baronian, Sacha Devillaz…

The athlete always decides on the calendar and projects he wants to work on, then we share about the consistency of it. My vision is all about the sport: do we have to add races, lighten the program, plan a pause mid- season, what level do we want to reach and when? 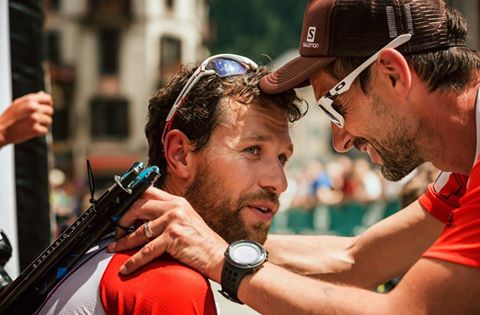